„Black is not sad. Bright colors are what depresses me. They’re so… empty. Black is poetic. How do you imagine a poet? In a bright yellow jacket? Probably not.“ – Ann Demeulemeester 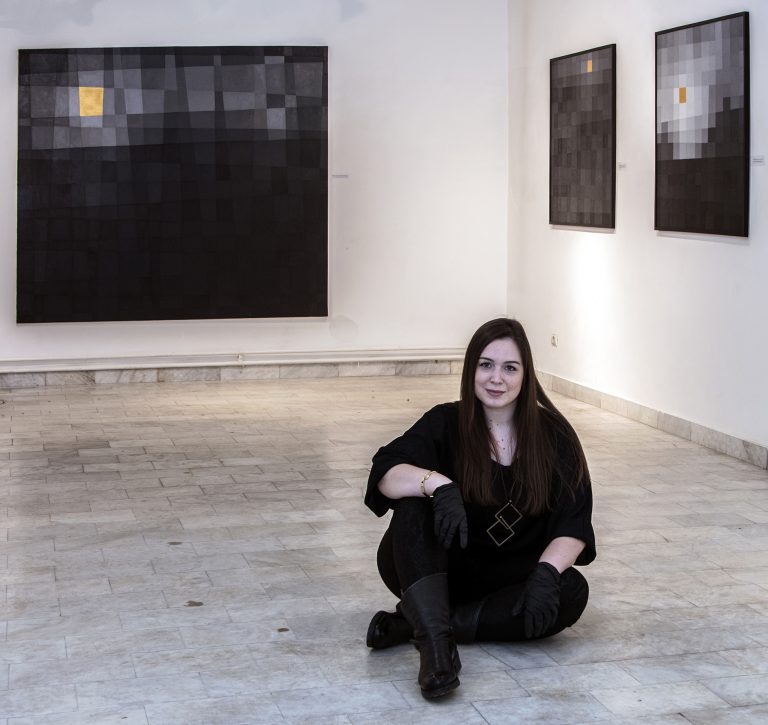 A visual artist of the younger generation whose current artistic expression is deeply rooted in the aesthetic thought of abstract minimalism and postminimalism, where she most frequently explores the capabilities of a framed geometrical form. Born in 1989 in Velika Plana. After graduating from the art high school “Tehnoart Beograd” she enrolled in the Faculty of Fine Arts in Belgrade, where in 2015 she completed her master studies of painting. After studies, she participated in numerous group shows, art colonies, and for now, has had five solo shows. Her artworks are a part of many private and a few public collections. She has been a member of the Association of Fine Artists of Serbia since 2020 where she actively participates in the organization of Youth Biennial. She lives and works in Belgrade. 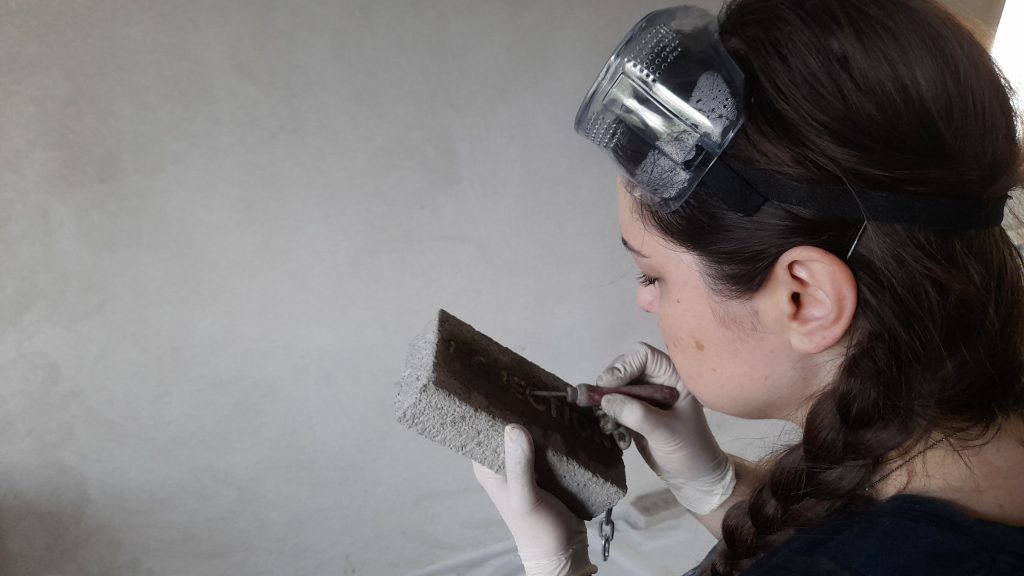 The Burden was conceived in an attempt to materialize and concretize the increasingly difficult external and internal factors, which are an inevitable part of our everyday life. As these elements frequently overlap and merge, it is necessary to clearly define them as linguistic concepts (and their synonyms) and as such, translate them into an adequate physical form. Even though the initial focus was on materialistic issues, the complex relations between terms demanded an expansion of focus in order to include psychological, emotional and physical spheres. The choice of concrete as a base material was caused by the reflection of the modern way of life, especially in urban environments, as well as our inability to depart from it on a long-term basis. The form of the brick, as well as the elements of chains and shackles, have for their objective to accentuate the decrease of freedoms in all their forms, as well as psychological confinements, which we frequently impose on ourselves. In the final implementation, the work is decentralized and very modular; by doing this we remove the requirement to have all elements of artwork exhibited in a single location. 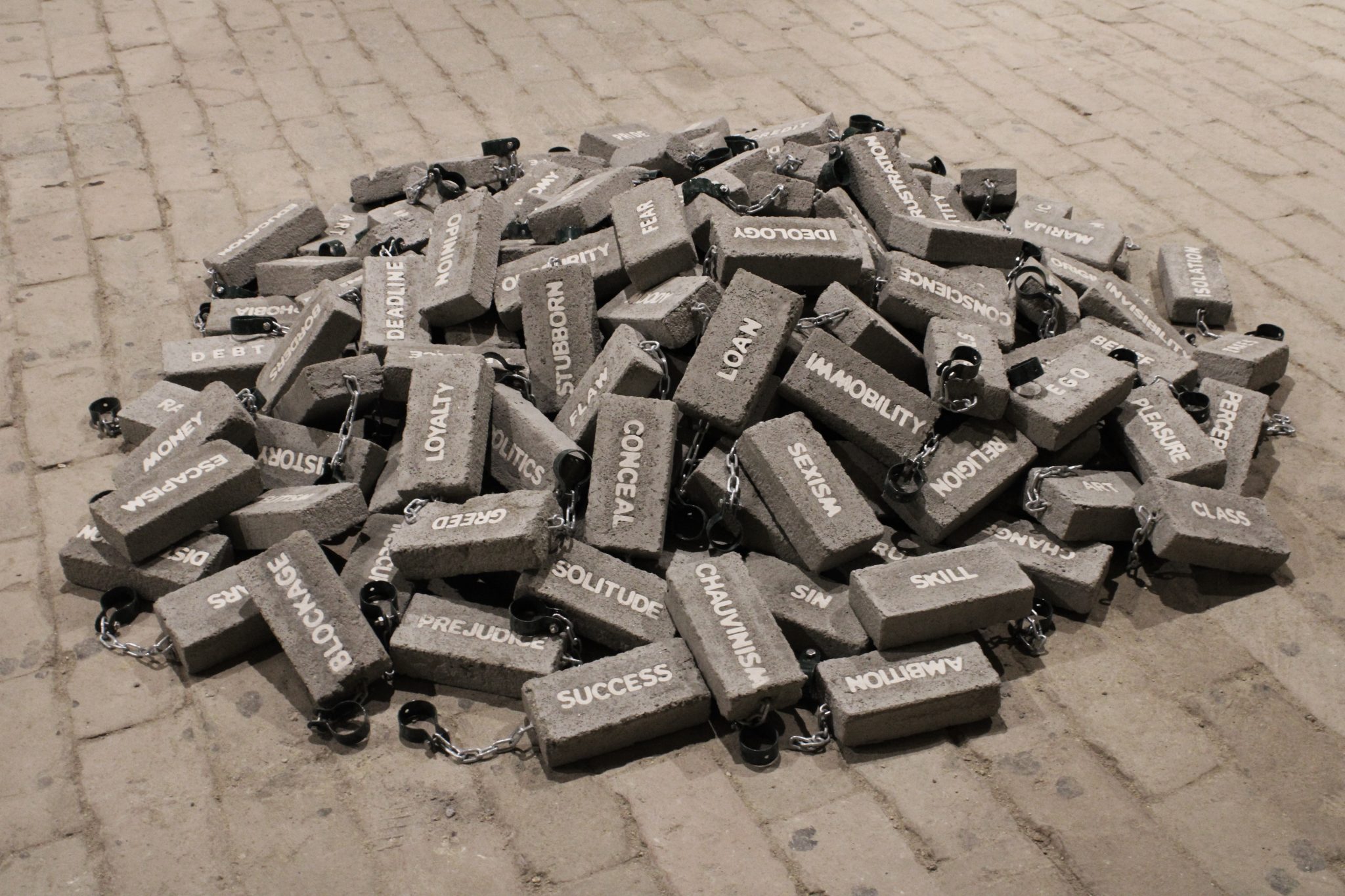 A set of different types of expression that young people have experienced interpreted in a unique way of communication of the same generations of young people. I think in this case the emphasis would be on mimes.

In addition to research, in principle, I sketch everything in my head, and I write down those "genius" (or not so ingenious) ideas so that I would not miss a thought later. When they shrink a little, I deprive myself of those who no longer pull me with the same energy as when they emerged. I try to think everything through, and only then to start the creative process, but it also happens that I impulsively start the realization, which knows its price. I almost always realize all the works in series, and I very rarely start a new cycle if I haven't finished the previous one. And when I start working, it is very important to me that there are no major breaks, not necessarily in the realization, but to be dedicated, to think about it.

Finances have always been problematic for me, so I believe that the challenge for me is the adequate production of work.

I am. The word artist has begun to carry a certain negative connotation in the collective consciousness, so as a result we have artists and "artists". I believe in the importance of the artist's role in society and his potential contribution. As for the word itself, it represents to me the profession of an individual who contributes and acts with his work in the field of culture, and can then develop in different directions in other fields as well.

I need to shut down / reset whenever I have more problems that intertwine. Sleep is an ideal solution, but I can't always just lie down and sleep, so I manage "not to think about anything", (about the problems) while playing video games. In this way, I managed to postpone the problems for a short time so that I could later dedicate myself calmly to solving them.

In a unique way, come up with a good, appropriate solution that has penetrated from previous knowledge. It doesn't even have to be a new, original idea in question, maybe the key is just an old one and used in a good way, for the right thing.

Absolutely everything became unpredictable for me and I am afraid that I plan and guarantee anything. I have a plan for the agreed exhibitions, I see a path that I would like to take further, and in principle, I mostly plan new series of works.

A combination of the inner urge to express creativity, beauty and freedom of visual expression and life experience.

There she is! And it's worth paying attention to! It introduces a new dimension that should be realized as such… However, it is not easy to notice. But I would also describe it as very ungrateful for development and work, because it lacks a platform. It requires a lot of sacrifice and instability, there is no guarantee that its importance will be recognized and that anything will pay off.

I would say it might be some vicious circle, or rather going in both directions; I somehow educate myself through work, because in the meantime I mostly research certain topics and come to new knowledge, and then with that new knowledge, the work itself develops. Although, it doesn't necessarily affect my personality.