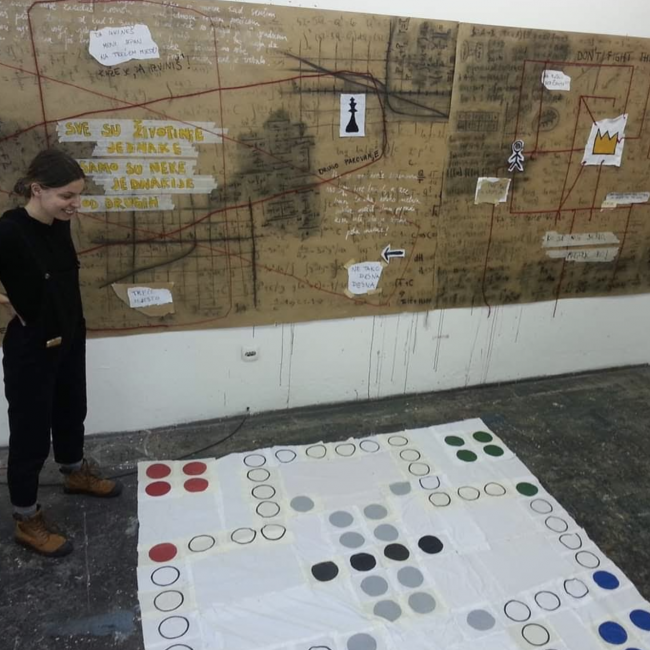 Adna Muslija was born in Zenica in 1996. After graduating from high school, she enrolled in the Department of Art Education at the Academy of Fine Arts in Sarajevo. She has spent one semester at the Faculdade des Belas Artes in Porto, Portugal, in the class of professor Sofie Torres Gonçalves, where she developed the project “Unbearable lightness of painting”, exploring contemporary trends in the medium of painting and the possibilities of the ‘new’ in painting. Choosing painting as major, she graduated in the class of professor Iva Simčić, phd., and defended her final thesis titled “Art as an ideological apparatus-ideology as artistic content” in 2019. She deepened her interest in art theory and research of the role of words and text through participation in the Summer School as School program of the Center for Contemporary Art Station in Pristina, where he successfully completed the course Inside the Language-Words and Art under the mentorship of Sezgin Boynik. In 2019, she was named the best student of the Department of Art Education and was nominated for the annual "Alija Kučukalić" award. She completed her MA programme at the Department of Art Education, majoring in painting, by defending her thesis "Communicational and semiotic dimension of art - From sign to ideology" in 2020. She has been awarded the Golden Badge of the University of Sarajevo two times. She is enrolled in a double major MA programme Art History: Modern and Contemporary Art and Comparative Literature at the Faculty of Philosophy in Sarajevo.
She has participated in several group exhibitions and solo exhibitions in Sarajevo, Banja Luka, Porto and Milan (online exhibition). In addition to independent artistic practice, she works within the artistic duo SINovi, with Kemil Bekteši. Currently, she is a member of the organizational and curatorial team of the Gallery of Contemporary Art Brodac in Sarajevo.

Aware of the fact that the art scene in Bosnia is rather a dying flower than a blossoming rose, the artist started questioning and analyzing the reasons for the present situation. It did not take her a lot of time to come to the realization that ‘small’, ‘unhealthy’, ‘local’ ideologies, along with an undeveloped economy are suppressing artistic and cultural development. It also became clear very quickly that those ‘small’ ideologies are nothing but a drop in the ocean of the global ‘game of power and ruling ideology’. Therefore, to represent the global game of power, Adna Muslija used local Bosnian children’s games as a motive. The games she is creating using collages have no inner logic, and the ‘rules of playing’ are impossible to get. Just like in the game of power, you see the game, you ‘know’ the game, but you will never be able to participate in the game. Collages representing the games are placed onto drawings of mathematical and science formulas. Math and science are discovered by people in order to help people understand the nature and life around them. Some people say the same thing about ideologies. However, ideology is created by men and is the strongest oppressor of men. ‘The creator is kneeling in front of his creation’ (Marx). There we see the difference between ideology and science, although they seem to have a lot in common. Science, as creation, is not placing itself as an oppressor, but ideology is, which is the reason why I used drawing of formulas as a metaphor of logic and reason, which are suppressed and ‘covered with’ children's games, a metaphor of ideological nonsense. 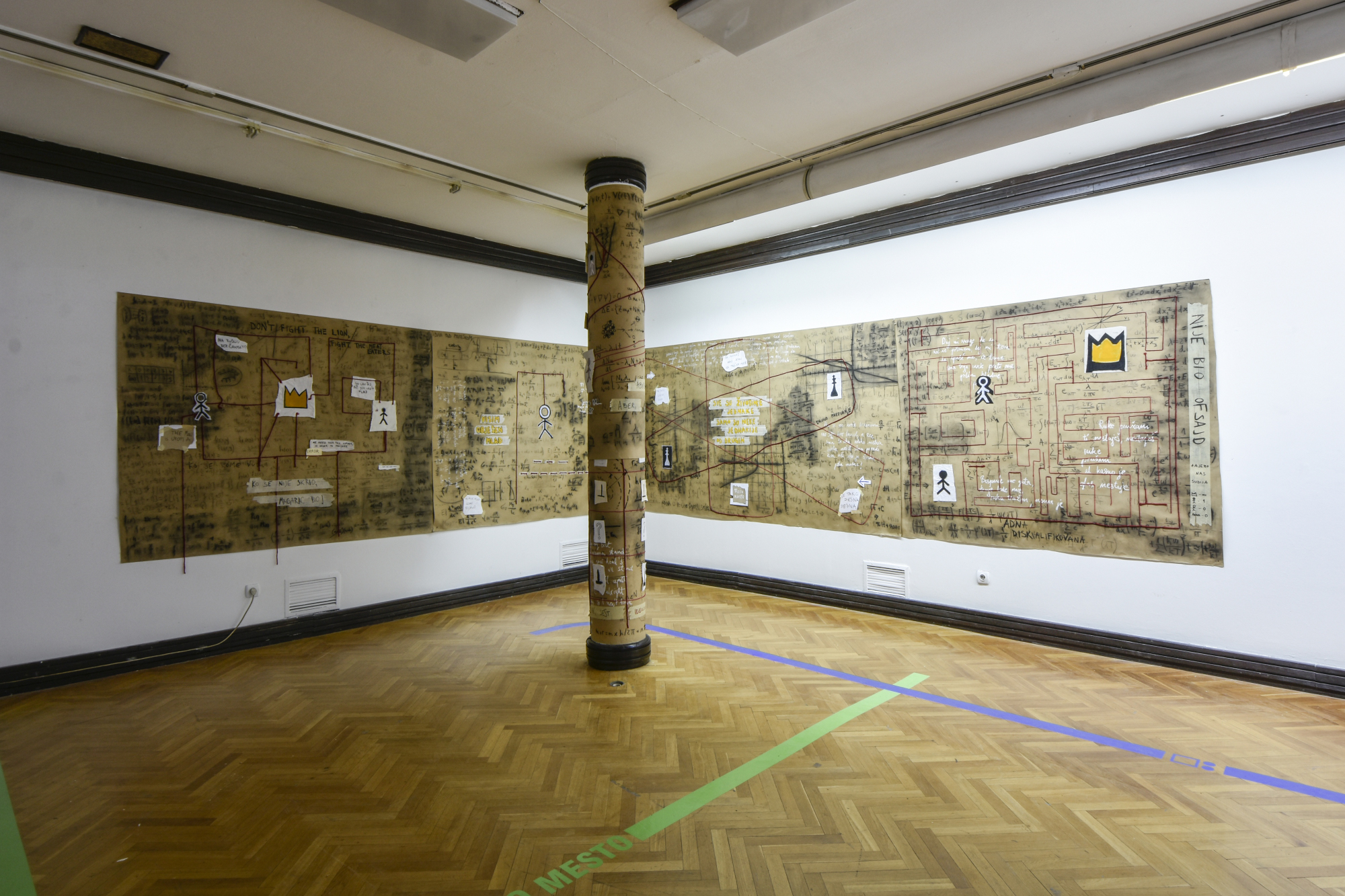 Language in common is an empty signifier. Always present, fluid and changeable. The goal we are constantly striving for.

The process of creating my work involves a lot of thinking and a little work. Each of my works is a homage to Stilinović's Praise of Laziness.

The only challenge is that it often leads me to think that art, which aims at social change, is not enough in itself.

I would rather call myself an anti-artist. The word artist, has gathered in itself a lot of spectacle, glamor and false spirituality. The artist became a pawn of populism and / or prestige. I hate both.

My practice currently took me to literature and philosophy, and often took me to mathematics and physics. So I gave up on planning.

My professor Iva Simčić with her sentence "Adna, painting is not enough for you."

The young Serbian art scene is worth nurturing and investing.

My creative process taught me that the world should never be viewed from one angle, and that such a way of life is tiring, but that it always provides a different “therefore”. My practice has led me to difficult questions, but also provided answers that give me optimistic answers.